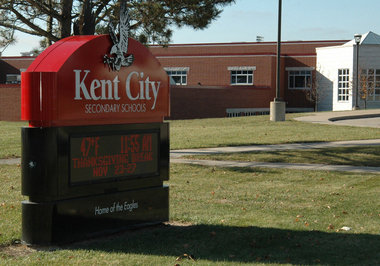 Kent City became an incorporated village in 1908. It is situated in Kent County’s northwestern corner, within Tyrone Township, and is surrounded by fertile farmland. Kent City is primarily a residential community, with growing industrial areas along the M37 state highway. The Rogue River State Game Area is close to the village. The area’s natural resources, combined with the village’s tranquil community character and proximity to the City of Grand Rapids, have contributed to the village’s status as a family-friendly community.

Kent City is provided educational institutions by the Kent City Community School District. The district is made up of three schools located within city limits. The schools include:

On the south side of Muskegon Street in Kent City, C.B. Leaver Park (4.43 acres) is located. There are two pavilions available for rent for a small fee. Residents can make pavilion reservations up to a year in advance, while non-residents can make reservations up to three months ahead of time. There are also charcoal grills, playground equipment, restrooms, a basketball court, and other amenities available at the park.
The name of Ball Creek Park has been changed to “Ball Creek Memorial Park.” The park is now officially known as a Memorial Park. The Village Office has a site plan, and people who want to donate to the memorial fund can contact the Village Office on Ball Creek Road, which is 14 miles east of Main Street. During the summer, the park has a small ball field, playground equipment, and a pavilion with tables (in season). A quarter-mile paved walking path around the park was added in 2008.