The City Of Coopersville, MI 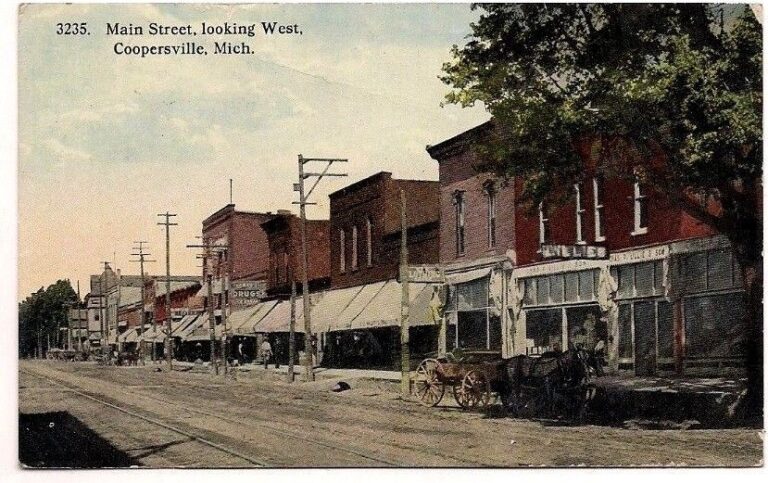 Coopersville is a city in north-central Ottawa County, Michigan. The population is 4,275, and it’s primarily an agricultural community. Despite its administrative autonomy, the city is located within Polkton Township. It is located just north of Interstate 96, along the eastern township boundary, and is bordered on the east by Wright Township. I-96 has two exits, one in the city’s southeast corner and the other in the city’s southwest corner. The city has a total area of 4.8 square miles and only contains one body of water, a small creek known as “Deer Creek.”

Benjamin Cooper of Utica, New York, bought 640 acres in northeast Ottawa County in 1845 to harvest timber. The area was densely forested, and it was close to the Grand River, which allowed lumber to be transported to Grand Haven, a major Great Lakes shipping port. Cooper built a sawmill with the help of his two sons. Benjamin Cooper offered land for railway right-of-way to the Detroit and Milwaukee Railroad in 1850. The railroad promised not to build another depot within five or six miles of a new town called Coopersville in exchange for the right-of-way. Coopersville was built after the company agreed.

In the fall of 1858, the first train passed through Coopersville on its way to Grand Haven. Coopersville was founded in 1871 as a village. In 1871, the town had a population of 500 people. Forests gradually gave way to fields, and lumbering was replaced by farming. In 1893 and 1898, fires destroyed the central business district on Main Street.

The Grand Rapids, Grand Haven, and Muskegon Railway began operations in 1902, and the Interurban Building at 363 Main Street was built for them. Its electric interurban service included a mainline that ran from Grand Rapids to Muskegon and a branch line that ran from Fruitport to Grand Haven. Coopersville grew slowly, and by 1940, the population had doubled to 1,083 people.

The community has grown at a rate of over 2% per year for the past 60 years, with a population of 4,275 in 2010. Coopersville has maintained its rural ambiance despite its growth, with over half of the land within the city limits still dedicated to agriculture. The Coopersville Charter Commission approved a charter that changed Coopersville from a village to a home rule city on August 29, 1966. On December 13, 1966, the electorate approved the change to city status. Coopersville was incorporated as a city on January 1, 1967, adding over three square miles to the total incorporated area of nearly five square miles.

Coopersville Farm Museum’s ever-changing art, exhibits, and entertainment helps preserve and honor the area’s agricultural lifestyle. This venue hosts acoustic concerts, tractor shows, quilt shows, and other events. A century-old sawmill, a 19th-century drugstore replica, and memorabilia from the early rock-n-roll star (and Coopersville native) Del Shannon are among the history exhibits at the Coopersville Historical Museum which is housed in a former train depot.

Summerfest is a six-day festival in Coopersville that includes more than 25 family-friendly activities such as live music, car cruises, fireworks, and more. Grassfields Cheese is a fifth-generation family farm that produces and sells cheeses and grass-fed beef, pork, chicken, eggs, and turkey. The farm store is open every day of the year.

The Coopersville Area Public Schools provides educational institutions from kindergarten to high school. Since 1999, all of the district’s facilities have been brand new or have undergone extensive renovations. The high school has excellent art, music, theater, athletics, industrial arts, and technology facilities. In 2009, a new 127,000-square-foot middle school opened. For students in grades 6 through 12, the district offers a one-to-one student technology initiative. The schools of Coopersville include:

A Council-Manager form of government governs Coopersville. The elected governing body (commonly known as a city council or city commission) is responsible for the municipality’s legislative function, such as establishing policy, passing local ordinances, voting appropriations, and developing an overall vision council-manager form of government for cities. County and other local government types follow the same pattern, with members of the governing body having a different title that corresponds to the body’s title.

The legislative body, which is elected by the public, appoints a professional manager to oversee administrative operations, implement policies, and provide advice. In Coopersville’s type of legislative body, the position of “mayor” is mainly ceremonial and may be chosen by the council from its members or elected as an at-large council member with no executive powers.